AXS knocks it out of the park with modern data analytics 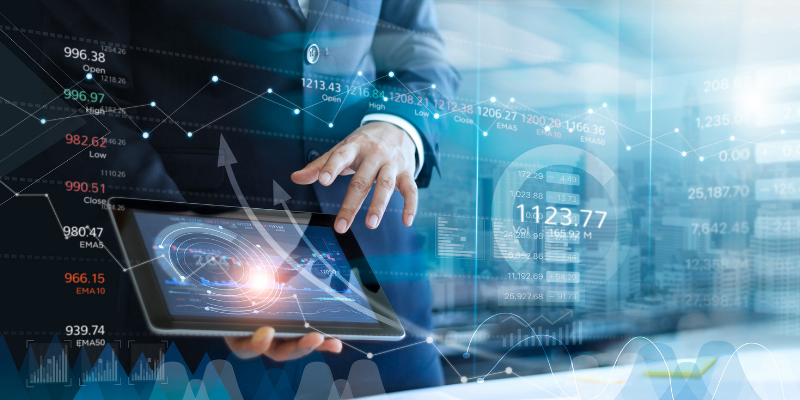 Learn how Etleap and Looker helped AXS reduce manual ETL work and reporting, allowing them to focus on growth for themselves and their clients.

AXS is a ticketing company for live entertainment

AXS is a leading ticketing, data, and marketing solutions provider in the US, UK and Europe. The company and its solutions empower more than 200 clients— teams, arenas, theaters, clubs and colleges— to turn data into action, maximize the value of all their events and create joy for fans. It is an enterprise event technology platform that services venues, promoters and sports teams; providing fans the opportunity to purchase tickets directly from their favorite venues via a user-friendly ticketing interface. While customers know them as a destination for tickets, clients recognize AXS for their data services, including transforming, reporting, analyzing, and more.

The data services offered by AXS have always been incredibly helpful for clients. But to make them so valuable, a significant amount of ETL work and reporting was required, which resulted in some challenges for the team. To learn more about those challenges, and how they eventually found a solution in both Etleap and Looker, we spoke with Ben Fischer, the Sr. Director of Business Intelligence and Strategy.

Ben oversees the Business Intelligence and Strategy team, which manages everything from integrations and building data models to powering the data warehouse and products across AXS. The team’s main objectives are to power AXS’s internal data services, while also delivering data services for clients.

Before Etleap and Looker, the Data Engineering team was spending more and more of their time working on internal and external requests for one-off ingestions and custom data sources. Each data source would take anywhere from half a day to weeks (or even months) to implement, which meant the team was spending most of their time on ETL work, and not enough time on making the data useful.

“With Etleap, we’re able to do the ETL end-to-end and get it directly into the hands of whoever’s trying to use it right away.”

Ben told us, “The whole team was just getting sucked into ETL work constantly, which was not the best use of their time. We wanted to be working on modeling and on the products.”

SEARCHING FOR A BETTER DATA SOLUTION

In order to find the right solutions to fit their needs, the AXS team compared several modern ETL solutions.

When comparing the options, they found that most of the tools were good solutions for getting ETL out of the engineers’ hands, allowing less technical people to consistently bring in the data, while also offering support and monitoring. However, Etleap stood out in two main areas: transformation and transparency.

For AXS, transformation was important because they wanted the ability to not only bring in a new data source, but automatically transform it into something useful for analysts. “Stitch and Fivetran are really focused on the “extract” and “load,” so they’ll bring data in from an outside source and put it into your data warehouse, but they don’t offer much in the way of transformation. You still have to transform it afterwards into something that’s usable, which means you’re still relying on engineering to access the data. With Etleap, we’re able to do the ETL end-to-end and get it directly into the hands of whoever’s trying to use it right away.” said Ben.

Beyond the transformation aspect, the AXS team was also impressed by Etleap’s level of transparency around reliability. “A lot of the competitors emphasize this idea of 100% reliability. They would say that they would never miss any data, everything would come through perfectly, and you would never have any issues. But we knew that wasn’t the case. No tool is 100% perfect, and when talking with Etleap, they were much more open about what we could expect. They acknowledged that 100% reliability is the objective, but that it’s challenging to achieve in practice, so it’s something they’re continuously working to achieve. Some of the competitors wouldn’t even acknowledge that reliability could possibly be an issue, which makes you feel like they may not support you if anything goes wrong.” said Ben.

To top things off, Etleap was also very straightforward to use. It required very little training and offered reliable support, which meant AXS could get up and running immediately. When the team first started evaluating ETL solutions, they encountered complexity with managing the tools and building integrations. “But with Etleap, it’s pretty straightforward. There’s always somebody available if you need to reach out. That meant we could start using Etleap in just a matter of days, rather than undergoing weeks of training,” said Ben.

Once the team found an ETL solution, it was time to help out the analysts. They looked at a variety of products for business intelligence, and even tried a few different solutions, but Looker stood out in part because it could get report building out of the hands of the analysts. Ben told us, “With Etleap, it was about getting ETL out of engineering. With Looker, it was about getting report building out of analytics, so analysts can spend their time actually forming opinions, defining strategy, doing analyses, and digging into the data, rather than just building reports day in and day out.”

Consistency and confidence are critical to democratizing data, and Looker’s data modeling layer allows people across AXS to pull their own insights and reports very quickly without having to worry about whether the numbers match. This means the Business Intelligence & Strategy team can now stay focused on building models and driving insights, instead of just building reports. 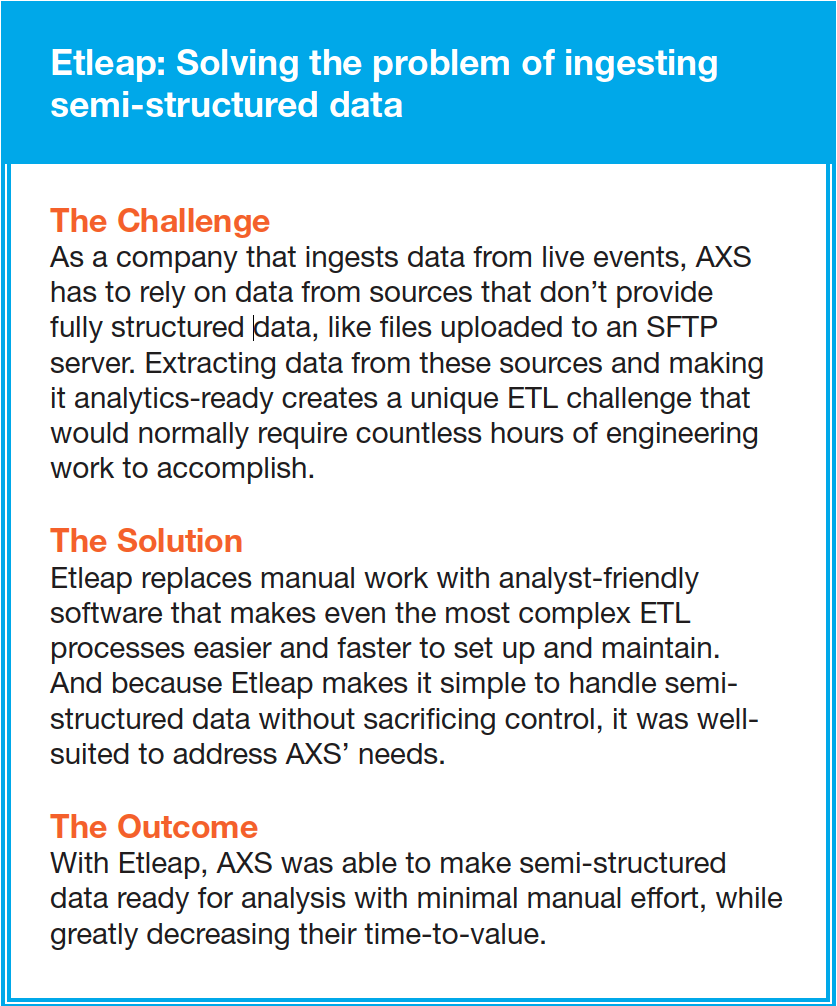 WITH ETLEAP AND LOOKER, THE ENTIRE AXS TEAM IS ABLE TO FOCUS ON HIGH-VALUE TASKS THAT DRIVE THEIR BUSINESS FORWARD.

Since implementing both Etleap and Looker, the impact has positively affected the entire AXS team, as well as their clients.

First, the Data Engineering and Business Intelligence & Strategy teams are spending far less time on manual ETL and reporting work, and much more time on high-value tasks that contribute to internal growth, as well as client successes.

“These tools make our various teams more impactful across the business. For example, if our engineers were just doing all the ETL work manually, we would not be able to do even half of the work that we’re doing to drive the business forward. And the same applies with Looker. Right now, we’ve got people all over the organization looking at reports every day in Looker and answering their own questions about what’s going on with the business.

“Our lives have become much less about pulling reports or bringing in data, and more about really driving value for the company beyond the mundane day to day.” Beyond making life easier and their work more impactful, reporting has also become much faster. Previously, you may have had to wait weeks, or potentially months, to get access to a new data source so you could do your analyses. Now, you can solve that yourself in a couple of hours, without having to wait for other people.

Looker gives companies a single source of truth for all their data.

“With Looker, it was about getting report building out of analytics, so analysts can spend their time actually forming opinions, defining strategy, doing analyses, and digging into the data, rather than just building reports day in and day out.”

“It also makes iteration much faster. We can define something, put it into production, and report off of it. If three days later we realize we forgot something, it’s a two-minute fix rather than going back to engineering, having someone spend half a day on it.” said Ben.

Finally, having access to Etleap allows the team to easily look at data from different angles, making the analysis and insights for clients even more valuable. “Etleap has a function for modeling data, which is useful for reporting, as it allows you to build the aggregations you need to power impactful reports. We can have processes that run everyday and get a quick summary of the data from all different perspectives. Before, it would have taken an engineer a couple of days to build that.” said Ben.

With Etleap and Looker, the AXS team finally has the time and resources to focus on bigger initiatives, including GDPR, internationalization, increasing accessibility across the organization, and providing even more data services to clients. With these tools in their arsenal, the sky is truly the limit.